I felt someone shaking my shoulder. Opening my eyes, groggy with fuzzy vision I see a Burmese man looking at me. “Inle Lake?” he says to Anjli and I.I look outside, it’s still dark outside. What time is it? I look at my phone and it’s 4:30 am. We’re not supposed to arrive for another 3 hours. The Burmese man says to us “Inle Lake?” Anjli and I look at each other and then at him and nod yes. He points to the door. We quickly exit the bus, it’s freezing outside. We’re in the middle of some village next to a lone tea stall. Everything is closed and just a couple of people huddle around warm cups of tea. Our bags are set on the ground and the bus is gone before we’re even fully awake. Now what?

We had gotten on the night bus from Yangon to Nyaung Shwe (Inle Lake’s tourist village) at about 5pm the night before. Everything we read said that it’s supposed to take 15 hours to get there. Somehow we had arrived in less than 12. I start to panic a little. Here I am in the middle of the road in some small village in Burma, a wife in tow with nowhere to go and no one that speaks English at 4 in the morning. Anjli is approached by a man in a jacket and a beanie. He says to her “Inle Lake Taxi?” to which, Anjli replies “Yes”. He says to her “8,000 Kyat”, roughly eight dollars. Luckily Anjli has done all the necessary reading in our Lonely Planet guide and speaking with other travelers, and it turns out that this is quite common. Being dropped off in the middle of the road at crazy hours of the morning, that is. Anjli assures me this is safe and we should get in this guy’s cab. It’s 13 kilometers to Nyaung Shwe, we stop just outside the village pay our foreigner fees ($10 each) and are dropped off at the Primrose hotel. We’d met a German couple a couple days earlier in Yangon that had recommended it to us. Two very smiley girls in their pajamas greeted us at the door and showed us the room. We took the room and the girls said get some rest and we could process the payment later that morning.

Burma is an incredibly safe country. Within 25 minutes of being dropped off on a random street corner, we were safely ushered to a clean hotel and had already crawled in to a warm bed. Anjli and I slept like logs for the next seven hours. For $30 a night, we got a clean room with hot showers and a wonderful breakfast with locally grown coffee. We had found a gem of a place.

After an amazing pancake breakfast, Anjli and I went off to explore the town and to find ourselves a boat for the next day. We wanted to check out the 5 day morning market and get our bearings around town. We spent the day just walking around Nyaung Shwe, a quaint little tourist village with lots of little cafes and restaurants. At night we went to check out a puppet show that was recommended and it turned out to be kind of fun but I think we realized that the intended audience is probably the five to seven year olds that were dancing along with the puppets and not a 30-something year old couple like us. Anjli and I chuckled at how silly we looked surrounded by toddlers watching a puppet show. 😛 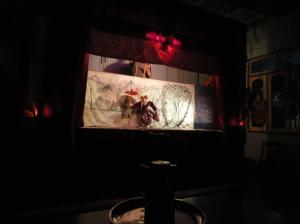 The next morning as our boat pulled out of the pier, a dark, dense fog surrounded us. We could hear the loud diesel engine noises of the early morning boat traffic but we couldn’t see more than a 100 feet in front of us. It was ever so cold and we were wrapped in thick blankets. The wind chill from the boat moving can get quite cold. As our boat worked its way out of the canal and further away from the village, the fog seemed to get denser. 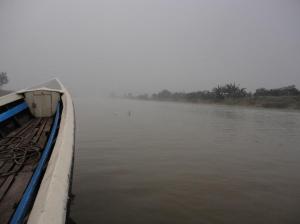 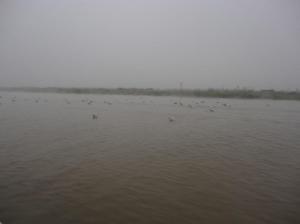 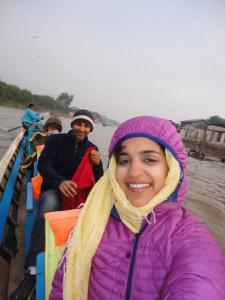 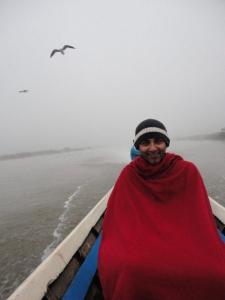 We worried about how we wouldn’t see the leg rowing fisherman we’d heard so much about. But as we neared the end of the canal, the mist seemed to clear a bit. And then out of the fog, we saw them. The fisherman on their boats and huge basket like nets rowing along.

The whole scene was something from a fantasy. Speeding through an alpine lake in Burma, early hours of the morning, seeing local fisherman on their skiffs, a mist hangs over the surface of the water, while the lake is surrounded by rolling hills with their peaks dotted with golden stupas. It was incredible. I always say to Anjli that sometimes there are moments in life where I wish I could pause them, freeze them and keep them with me to be able to come back and live those moments again. Being out on the lake that morning was one such moment. 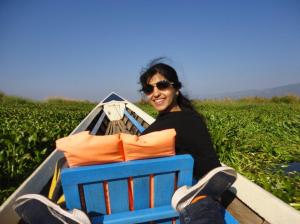 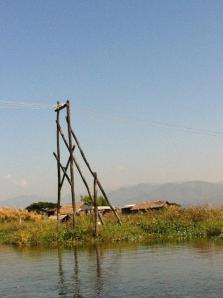 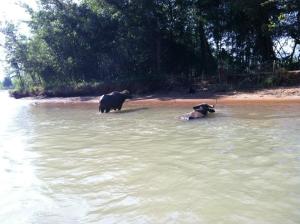 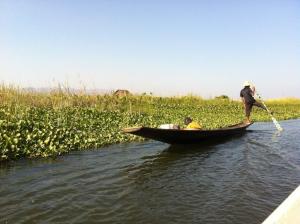 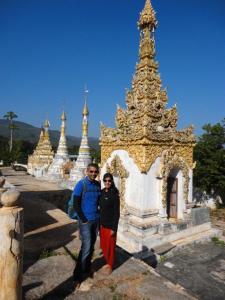 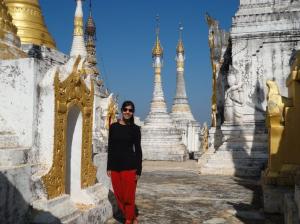 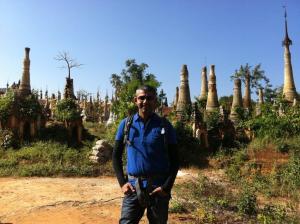 We had lunch at a restaurant that was a huge house built on stilts over the water, we visited a factory that made scarves from lotus silk and had just all around fun day of exploring the lake.

When we finally came back in to town at 4 pm, we were ready for some dinner and drinks. Here’s a picture of Anjli enjoying a Lychee martini. 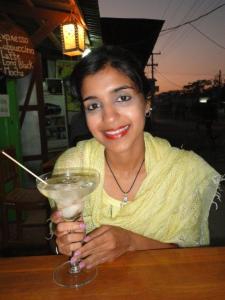 Continuing our theme of drinking, Anjli and I decided to bicycle down to one of Myanmar’s only two wineries, Red Mountain Estate. At breakfast that morning, we met Francis who happened to be from Seattle. Francis, a recent UW graduate, is travelling through Asia on a fellowship studying and writing about, among other things, ethnic minorities in Southeast Asian countries. He’d been on the road (if I recall correctly) for five months and planned to be travelling for another six or seven months. WOW!

So after breakfast, Francis, Anjli and I hopped on our bicycles and had wonderful bike ride through the village to the winery. We passed through open fields and beautiful countryside yelling ‘mingulaba’ to the villagers who all yelled it back with huge smiles and waves. We sampled wines and Francis and I decided to share a bottle of the Shiraz – Tempranillo while Anjli got a glass of their late harvest which was similar to a Riesling. Best of all, the bottle of wine was only 10 bucks. No markups. We met some other interesting travelers there, a professor from Finland and a couple from Holland. Between the wine and the conversation, nearly five hours had passed. Anjli and I stumbled back to our bicycles, smiling and just happy about the wonderful time we’d just had. Travelling has been fun but it was nice to just sit, relax and have a bottle of wine over sunshine. It felt like a bit of home drinking on the rooftop of our condo back in Seattle with friends. 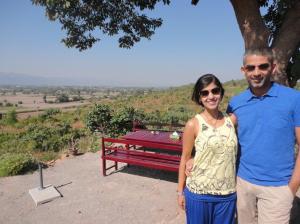 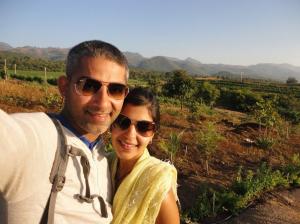 We rode back to the hotel on the bicycles watching the sun go down of the valley excited for our next adventure. The next morning we were to be off to Bagan, the land of a 1000 temples.