We spent a couple of days in Delhi and Meerut to spend some time with Raj’s wonderful extended family. Grandma, Uncles, Aunts, Cousins, Nieces, Nephews – a good time was had with all, especially Raj’s cute little nieces and nephews. 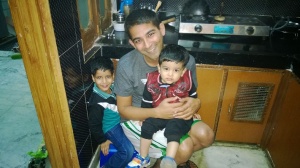 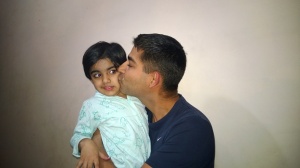 We then took off to travel in India for a few days. In India – a country I didn’t want to travel through at all outside of meeting with family. Raj had traveled in India back in 2005 and if you ever get him started about that trip, I promise you it’ll be difficult for you to make him stop :). Somehow, this man convinced me to try traveling in India for just a few days. We didn’t book our flight out to Bangkok so that we could leave as soon as I wanted to. We ended up spending another four weeks (!!) in this country in addition to the two we had already spent in Goa, Bombay and Delhi!

Raj suggested we go to Rishikesh where I could get my yoga fix. The best way to get to Rishikesh was via Haridwar. Haridwar is one of the holiest cities in India – millions of Hindus go there every year to wash away their sins by taking a dip in the Ganga river. The evening artis (prayers) were supposedly beautiful and both my and Raj’s grandfathers’ ashes were spread on the Ganga here, so we decided to spend a couple of days exploring this little city.

On our first evening in Haridwar, we tried to figure out when exactly the morning arti was held. We asked three different people and got three different answers ranging from 5am to 5:45am, none of which were correct as we found out the next morning. Anyone who has traveled in India will know that Indian people don’t like saying ‘I don’t know’, so they give you an approximate answer to the best of their abilities. In any case, since our hotel was a bit far from Har Ki Paudi (translates to footsteps of Shiva), the Ganga ghat where the morning arti took place, we left real early at about 4:15am and arrived at the ghat before 4:45 am. You have to take your shoes off, so we were standing bare feet on the cold, wet stone steps waiting for the arti to begin. In spite of being harassed by self-proclaimed pandits to perform a private pooja and our feet slowly but surely turning into ice, it was fun to watch the activity around us – hawkers setting up shops, diyas made of flowers and leaves with a small candle and incense sticks floating downstream in the river, and groups of people taking dips in the water.

Men undressed down to their underwear and some women down to their sari blouses and petticoats (most women were fully clothed in sarees),  stood waist deep in the often fast flowing Ganges and held onto the railings or chains built specifically for their safety or held on to each other, and quickly submerged their upper bodies in the water right to the top of their head – this action of dipping one’s entire body in the river and letting the water wash the body is said to wash away all your sins. We saw a group of eight women standing in a circle and holding onto each other’s hands to steady themselves in the fast flowing river take 10 dips in unison while yelling out ek-do-teen… (one, two, three…) as they came up for air. The scene really makes you question your inner atheist and ask yourself if you’re the one who is missing something important in life, if it was possible for you to believe in god as unconditionally as these folks who subject themselves to freezing waters at four in the morning, all in the name of religion.

Raj and I took in the scenes and lit a beautiful diya made of all compostable materials and let it flow in the Ganga. We got some hot chai to warm us up, watched the arti which finally started at about 6:15am(!) and hung around till the sun rose about 7am. 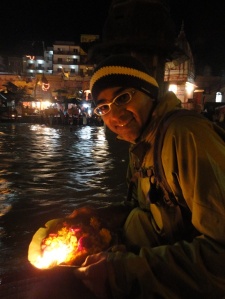 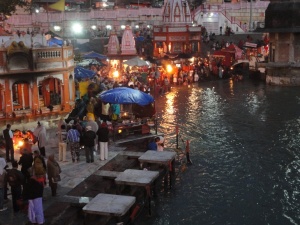 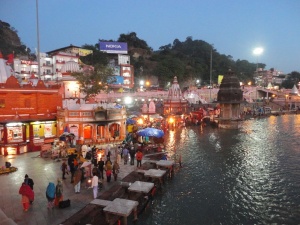 The next day, we decided to go to Manasa Devi, a famous Hindu temple on top of a steep hill in Haridwar. In spite of a cable car available, we decided to hike up the 2km in the blazing sun – the temperature variations were really quite extreme. While we were rewarded with beautiful views of the Ganga plains, it was just too hot even for a short hike. 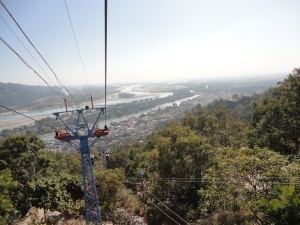 The visit to this temple, one that is visited by Hindu pilgrims from all over the country, was ironically the least spiritual experience for me. We were ‘greeted’ by two scary looking men in black robes and faces painted black who insisted on touching us and putting tikkas on our foreheads so that they could ask for ‘donations’. We dodged them and made our way up. Along the way, there were plenty of hawkers selling flowers and other offerings who insisted on sharing their opinion on what you should buy and what you should be doing at the temple. The temple itself wasn’t very impressive with statues of a few Gods/Goddesses, just overly crowded with people who wanted to darshan (view the faces of the deities to absorb some of the divinity) and make cash donations. A few priests said things like – if you don’t darshan this particular God, something untoward will happen to you, or you better make donations to this God. Frankly, I was far from moved and in fact, disturbed by their pushiness and decided to make an early exit. A lowlight of the trip. At the time, I had a difficult time separating the priests’ pushiness from that of the religion’s and considered myself fortunate to not succumb to the superstitions instilled by these so called messengers of God.