We’re in Hawaii! Man, do we love this place! Raj and I often fantasize about what it would be like to live on one of the Hawaiian islands, what we would do for a living, whether we would have beach bodies 😉 and how we’d deal with the tourists!

I’ve been eating a bunch of tuna poke (so much that my tummy hurts) and Raj has been drinking local beer like a fish – he claims that he won’t get good beer while we’re in Asia! 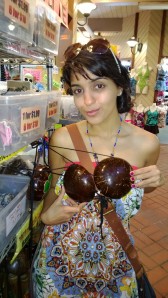 We are staying in a vacation rental condo with a view of the ocean in Waikiki. This luxury is not going to last long though since we’re going to have to keep a close watch on our spending when we head to Europe in a couple of days. One of our goals during this time off is to try and get as much luxury as possible without breaking the bank – I call this being a #balleronabudget 🙂

We haven’t explored the island a whole lot yet, but from first impressions I think I preferred the laid-back culture and the green lushness of Maui. Oahu (specifically Honolulu) has a lot of concrete and wayyyy too many tourists who seem to be here to shop at high-end retail stores. We are headed to North Shore tomorrow so let’s see if my impression changes. We’ve done a bunch of touristy things already:

– soaked in the sun on the beach at Hanauma Bay. Beautiful crater that got filled in by the ocean. Absolutely visit here if you’re going to be in Oahu. Here are some photos from bing: http://www.bing.com/images/search?q=hanauma+bay. My photos don’t do this place any justice.

– Pali lookout. Crazy how the side of a volcano caved in into the ocean! A bunch of scenes from The Lost were filmed here.

– Hiked a trail off of the Pali lookout. We were trying to find the Likeke falls but went up the wrong trail. Fail! The only win was plucking out guavas from the guava trees that seemed to be growing like weed in the forest! Raj was pretty happy with the guavas! 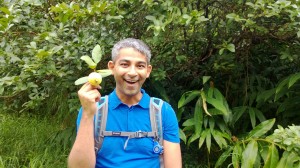 – Hiked to the top of the Diamond Head Crater. Walked hella fast part of the way to beat a poor, fat kid who was unaware that he was on a race to the top with me 😉 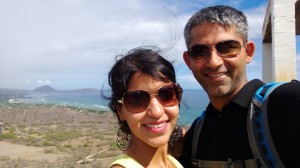 Our return tickets in March are also through Honolulu and we’re planning to spend some time in Hawaii before heading back to Seattle. Although I think we’ll head to Kauai instead of hanging out in Oahu. So, for family and friends, who can’t visit us in Asia, think about visiting us in Kauai in March (20th onwards)!